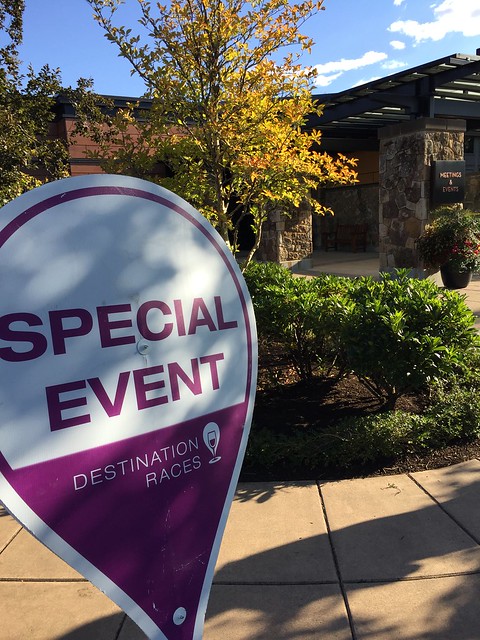 I lead a relatively simple running life. I don't have the most expensive and top-of-the-line running gear. I run a fair amount (25-30 races per year), but haven't yet gone on a really extrvagant running vacation. And I DEFINITELY don't hang out with Olympic running hopefuls. But we got the opportunity to be wined and dined at the beautiful Allison Inn and Spa at the Pre-Race Dinner hosted by Destination Races' Oregon Wine Country Half Marathon.

The pre-race dinner is a race extra that ran at $75/plate. My wife and I decided to attend together and get fancied up for a night of wine, food, and entertainment. Upon entering the beautiful hotel, we were greeted by Natalie’s Estate Winery Winemaker, Boyd Teegarden, who happily and professionally showcased his 2013 Viognier and 2012 Tempranillo – both foreign to us being casual wine drinkers – but oh, so tasty. Boyd was in his element and definitely knew his stuff. Even despite his bandaged up right arm (self-inflicted on a bee vs. machete attack gone awry), couldn’t keep him from keeping our glasses filled.

The food was served buffet style, but definitely not your Hometown Buffet style. Though the descriptions of the food were much more technical than I can remember, we were generally feasting on:

Again, that’s just the dumbed-down, simplistic version, and the food was very good and kept in line with being perfect for a runner’s palate and stomach less than 12 hours before race start.

The speakers of the night were Destination Races’ President, Matt Dockstader and running professional, Alexi Pappas, who is currently training for the 2016 Olympics in the 10,000 meters with the Nike Oregon Track Club Elite.  Matt talked about how Desitination Races got started (let’s just say it involved a wine-filled night and running) before giving way to Alexi. She was clearly nervous being in the spotlight and did her best when she was able to talk about running in it’s purest form – a passion of love, hate, pain and fear. She had a few sidenotes about turkey sandwiches and pooping while running that were as confusing as they were hilarious and left us with smiles on our faces. She is currently producing a movie called “Tracktown“, so check that out!

But at the end of the day, it was the meeting people that really drove home the awesomeness of the event. In fact, the conversations were probably the only thing better than the wine and food. We were happy to meet Urban Bliss Life, a local wine, food and travel blogger who was running the half-relay the following day. We also sat with Destination Races’ PR guy from Boulder, who grew up in Hillsboro and was back in Oregon for the first time in years AND actually running his first Destination Race. We also chatted with a lovely lady from Panama City, Florida, who was raving about the beauty of Oregon as we quizzed her about her favorite moments from her 200+ marathons (200!!). We all sat around the back table, sipping on wine and sharing stories until everyone else had left. Now that’s worth the price of admission right there.

Last year, the pre-race dinner was at a beautiful local winery, so it’s possible that future incarnations of the meal will be varied to keep things fresh and new. I like thatWhile I generally don’t purchase VIP race passes or experiences, this was one that I was happy to have been able to take part in.

2 Comments on Wining and Dining with future Olympians: The Oregon Wine County Half Pre-Race Dinner experience