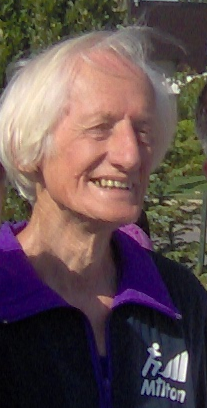 Running as the fountain of youth: A recent study found that older athletes typically have the fitness profile of much younger people. That's probably not a surprise for regular runners, especially if you've run a race against Joe Dudman(!). Or if you've ever checked out the age-group PRs for Canadian runner Ed Whitlock, who ran a sub-3:00 marathon in his 70s, and a sub-43 minute 10K in his 80s. The study was based on a fitness calculator that Norweigian researchers came up with. If you want to calculate your own "fitness age," you can use the online calculator here. It seems to favor endurance athletes like runners, because there aren't a lot of questions, so the "what is your resting pulse?" one seems to have a big impact on the results. I ended up with a fitness age of "under 20." At least, I think it's fitness age, and not maturity age.... Take the test and post your results in the comments!

* A tale of two pictures: Compare and contrast these two images of female runners. The first one is 18-year-old Erica Jean, a “plus-size model” who happens to be a runner and who is gracing the cover of Women’s Running Magazine. The second is model and parent Ymre Stiekema, who appears in an ad for a running stroller while running in shoes and a bikini [warning: somewhat NSFW depending on your sensibilities]. I’ve run a fair number of races, and I’ve seen a good number of runners who look like Ms. Jean, but I’ve never seen anyone dressed like Ms. Stiekema.

* Running isn’t always cheap, but it’s not this expensive: It’s often said that running is cheap – you just need a pair of shoes and a road. (Well, I suppose you need shorts, socks, and a shirt too, unless you want to look like Ymre Stiekema in that ad….) But then you find out that good running shoes aren’t necessarily cheap, and they should be replaced at distressingly frequent intervals. Then you find out that it’s more comfortable wearing tech shirts when you run, and you keep buying them when you see them. Then you decide to get a GPS watch … So, that all adds up. But at least it’s not $500 a month in gym and fitness class expenses!

* Noooooo, not yogurt!: This article about five unhealthy “health foods” was welcome only when compared to that New Yorker article about earthquakes and the Pacific Northwest. Number 1 on the list was flavored yogurts. I love yogurt – and not that Greek stuff, but the pure, sweetened low-fat yogurt that seems like it’s getting less and less shelf space all the time now. Ah, well, what harm is there in a bit of sugar…?

* Beware of thieves in gyms: If you only run outdoors, this probably isn’t a problem for you, but if you have your share of gym time, it’s disturbing to read stories like this one about thieves’ breaking into lockers in gyms. I may be overly cautious, but I keep my gym bag right next to the treadmill.

* “Nature’s stairmaster”: On a recent trip to Vancouver, BC, we visited Grouse Mountain, and I decided to tackle the Grouse Grind. This is a 1.8 mile trail with a vertical gain of 2800 feet. One of the bonuses of going up this route is that you don’t have to pay the aerial tram fare. I didn’t bother reading any of the tips for first-timers but probably should have. How bad could this be, I wondered. 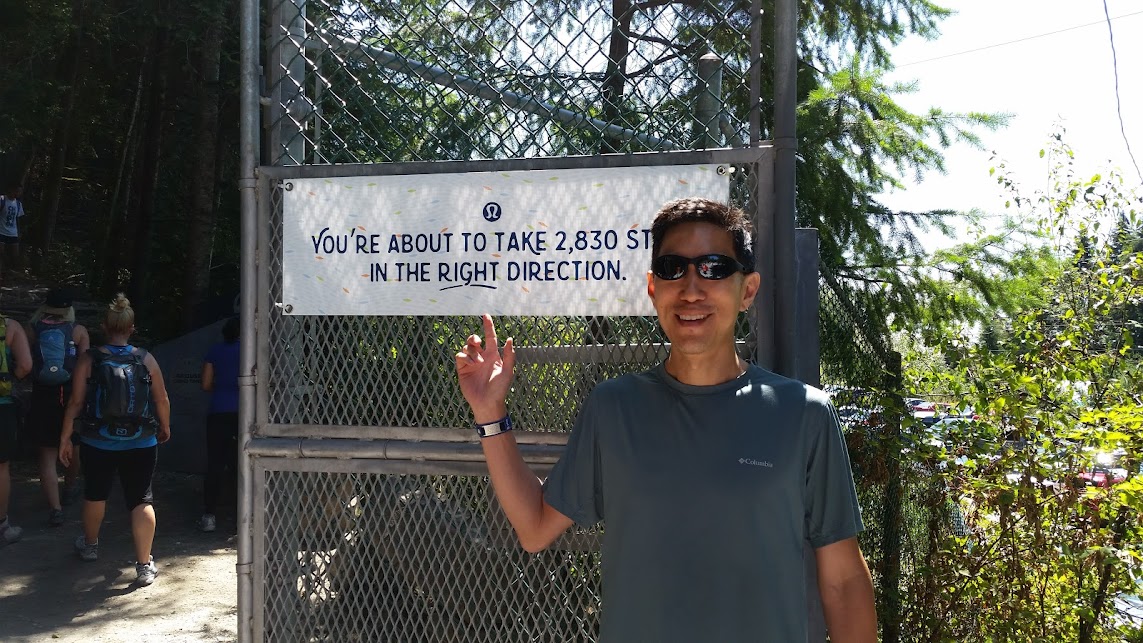 Me, at the entrance to the Grouse Grind. Just 2830 steps to the top!

The record for ascending the route was 25 minutes. I figured (overconfidently) that I should be able to reach the top in about 45 minutes, as I’ve made it up Multnomah Falls in about 20 minutes, and that’s a pretty steep 1 mile trail. I hit the Grind and started running. That lasted for about 0.1 miles before I truly understood the difference between steps and trails. Moreover, Multnomah Falls increases about 650 feet over a mile, which is less than half the steepness of the Grind. I made it the top, but more than 7 minutes off my estimate …. (For more about the running opportunities in Vancouver, check out my running diary here.)

* Fitness psychology: Dick Talens, one of the founders of Fitocracy, has an interesting post about the five fitness mindsets that we go through. It’s a helpful way of self-diagnosing when and why you might be in a rut.

* When 5K races seem like they’re 3.3 miles….: Okay, I’m guilty of complaining about mismeasured course distances, but here an elite runner explains why we should build in a 1% error margin in GPS watch readings. (To be fair, some of the mismeasured races I’ve complained about have exceeded this 1% margin.) One of the key takewaways is that certified courses are measured precisely in a way that you’re unlikely to be able to replicate in a race because of the inability to take turns the same way.