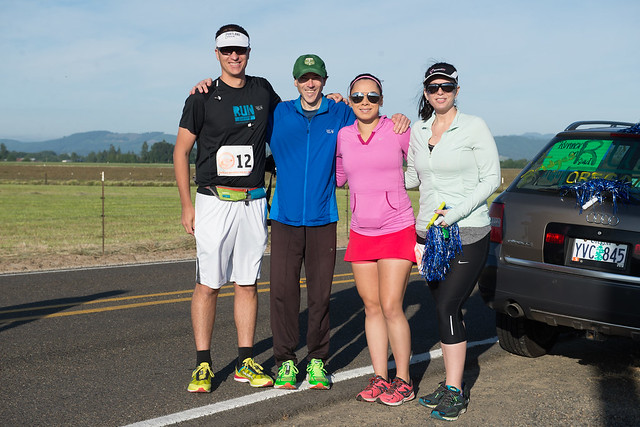 Over the past weekend, 5 brave Run Oregon bloggers ventured into rural Washington and Columbia County for the 2015 Twelve Bridges Relay, put on by DoubleDogDareU Events. We ran, we bonded, we sweat on each other, we made snowcones, we laughed, and we grew closer - not a bad day if you ask me. See our recap of legs 1-6 here and read on for legs 7-12.

My next leg started at the lake in Vernonia and the 5.5 miles was labeled as hard, though it seemed to be pretty flat, with some rolling hills. It was mostly shaded and trees lined the trail; I loved running a paved trail and most of the cyclists were pretty nice. It was maybe a mile in when I was passed by Brian, which I was somewhat relieved to just get it over with since I knew it was coming, dang it. Besides that, it was pretty uneventful, not a lot of runners out there with me, making it a pretty peaceful leg. I passed off to Matt, like a typical klutz, dropping the slap bracelet, but he didn’t miss a beat. Grabbing the bracelet he took off and I knew I wouldn’t have long before he passed off to me again – 4.2 miles to be exact, downhill and he’s fast. Anxiety set in to get to the exchange point, change out shoes and be ready for my last leg.

After a few hour break from running, I was ready to get back at it for my third and final leg of the day. I had on a new shirt and new songs loaded, and was ready to take on the reverse of Chere’s leg 5. And the reverse meant that instead of a steady decline, I was dealing with a steady 4.2 mile incline. I was lucky that this leg was shaded, as my feet and lungs were apparently confused as to why I was running yet again. This leg ended up feeling a lot longer than 4 miles, but I managed to put in a relatively decent time nonetheless. I was probably aided by the serenity of the outdoors around me. Despite my tired body, my mind was at peace and ease. As the climb gave way to a huge downgrade in the last .1 mile or so, I trudged happily into the handoff area with a feeling of accomplishment and happiness. Now Teresa had her last leg of 3 to finish and we needed to be there to support her!

My final leg was an 8.4 mile stretch of the Stewart Stub trail and, it was a gradual downhill for the vast majority. From the exchange point, there’s a pretty steep climb with a couple of switchbacks, which was not fun at all. I knew Brian was right behind me – AGAIN – it was hot at this point and that climb got me sucking wind and bugs. I inhaled a couple of bugs on this stretch and couldn’t decide if I should try to cough them out or just swallow.  I decided to hold my breath in areas that might have a lot of bugs and am grateful I didn’t pass out on this leg. The sun was out and this stretch had plenty of shaded sections, but also spots without protection. I wasn’t sure if I’d see my teammates during this one, since it’s on the trail and access isn’t super convenient. I was so excited to see Marilyn with my water bottle around mile 6.  It was the best surprise ever and got me through the last couple of miles, before passing off to Joe.

It was getting hot by mid-afternoon, but I had been drinking plenty of fluids and wasn’t too concerned about my final flat 4.5-miler. I felt surprisingly good as I took the handoff from Teresa, set off, and settled into a nice pace. This section of the trail is very straight, so I concentrated on maintaining a steady rhythm, exchanging greetings with other runners and walkers, and trying not to look too far ahead. I had run the Banks Linear Trail Brave Run a couple of weeks before along the last couple miles of the leg, so I knew what to expect as I approached the town of Banks.

Way, way up ahead, I finally spotted the trailhead and knew I was getting closer to town. I reached the parking lot, crossed the road, and began the final stretch along the sidewalks of downtown Banks. I saw the park up ahead on the right and knew the exchange at the high school was coming up quickly. But my mental map was off, and I happily saw my teammates and the exchange right in front of me, a block earlier than expected. I handed off to Cheré, caught my breath, and gratefully accepted a homemade snow-cone from Teresa, whose everything-but-the-kitchen-sink relay packing method was suddenly highly appreciated!

I’m sure you’re all familiar with the phrase, “what goes up must come down!” …well, I had a little of that come leg 11. I knew my final leg of 5.3 miles would be all out in the open at the hottest part of the day, but I figured that since the course was relatively flat, it wouldn’t be too difficult despite the fact I have done NO training in the heat at all yet this year. I was wrong. I started the first two miles way too fast (still giddy from my PR earlier), and from then on I just couldn’t seem to cool down. Other runners support teams would hand me a nice cool bottle of water along the way that I would douse my head with, but I was just never able to get to the zone where everything comes together.

I don’t care. I don’t care that I didn’t PR again, or that I didn’t make the leg look effortless. It was a GREAT leg! Why? The PEOPLE!!! It goes without saying that the actual course was beautiful, as I never get tired of running on country roads, and there were even some gliders in the air, adding to the tranquility of the surroundings. But the PEOPLE were what made the leg great! Lots of course volunteers smiling all day in the heat, never complaining…the 2 or 3 runners who passed me close to the end offering tons of encouragement…and the support teams who saw me struggling in the heat and never thought twice about offering me water accompanied by lots of cheers and cowbells! My view on relay races has done a complete 180 degrees, and I can’t WAIT to do this one again next year.

My second leg (leg 12) was 4.1mi. At that point in the day, it was HOT. I felt too warm just standing waiting for my runner to come in! By the time the wristband had been handed off to me, I was sweating, and wondering what I had gotten myself into! I was glad that Teresa had made us slushies earlier that afternoon and was really wishing I could have another, since the Gatorade in my hydration belt was actually HOT from the direct sun. Being the last runner, you know your team is ready to be done and you’re ready to be done, it’s all about cranking out those last few miles even though you’re hot and tired. As I came around the last corner and saw the finish line and my team waiting for me, I sprinted hard, and they ran with me across the finish line.

The volunteers were awesome. There were lots of them, and they were all really friendly. I was really impressed by the signage marking the course–they did a fabulous job! It would be nice if they had a beer sponsor next year so that each participant received a free beer. The post run baked potato really hit the spot! I liked the medals also.

“I love this relay. It’s fun, pretty and I appreciate the out and back course. I like to know what to expect and seeing familiar sights on the way back. Since they reverse the direction, it changes it up a bit and prevents boredom. It’s simple and convenient, doesn’t have the headaches that come along with a weekend relay and I get to sleep in my own bed that night. It’s an added bonus that my race shirt fits perfectly and I don’t think that’s ever happened. My favorite part, though, was just getting to spend time with the Run Oregon crew, you can learn a lot about your friends when you’re squished in a car with them all day. I learned Chere is an extreme couponer and loves a good deal. I learned that Marilyn is just as fun and feisty in person as online and so appreciated her taking the hottest leg. I was reminded that Joe is fast, funny and annoyingly humble.  I’m still looking to find something I’m better at than him. Finally, I learned to never listen to Matt about packing. I spent the first half of the day freezing because he talked me out of bringing my parka. I can’t wait to run with these guys again.”