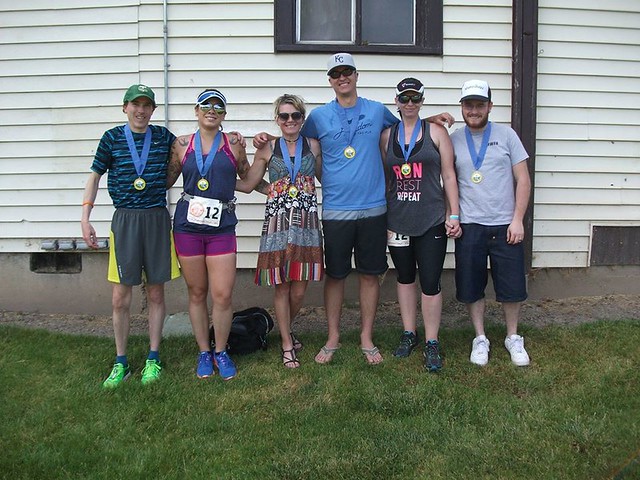 Over the past weekend, 5 brave Run Oregon bloggers ventured into rural Washington and Columbia County for the 2015 Twelve Bridges Relay, put on by DoubleDogDareU Events. This event received rave reviews in 2014 and Run Oregon's team had a blast then. Only 2 bloggers made the return trip (Joe and Teresa) in 2015, which offered up a great experience to the rest of us. We ran, we bonded, we sweat on each other, we made snowcones, we laughed, and we grew closer - not a bad day if you ask me.

I don’t like pressure, which is probably why I gave myself a little padding with my estimated time when we registered for the Twelve Bridges Relay. Adding to that, I was the first person to run on our team, which gave me a little anxiety. Actually, after looking through the pre-race pictures, it appears that it gave me a whole lot of anxiety. Even with only about 10 other people starting at the same wave, I was worried I’d be last, disappoint my team and my biggest fear, I’d make a wrong turn. I took a wrong street on my way to the race, so that didn’t help my confidence.

That anxiety quickly went away once we got started. I chatted with a couple of the people, asking if they were familiar with the course. We all seemed to be in the same position, crossing our fingers the course was well-marked. Fortunately, it was easier to follow than my Google Maps had been finding the race, yellow arrows lined the entire course and there were volunteers anywhere it might be questionable. My first leg was pretty uneventful, which is just how I like it. The sun was out and the temperature was cool, ideal running conditions. The 4.1 mile stretch flew by since I was distracted with vans, team signs and people along the way, plus it was a bonus that it was super flat and out in the country. Just before passing off to Matt, I was misted with a sprinkler watering a field. I knew I wouldn’t smell good for the relay, but I really didn’t want to smell like grey water. It proved my team was awesome, not a single person complained about the stink that followed my first leg. I took the next couple of hours to eat, cheer and eat some more since I wouldn’t be running again until Leg 7. Fortunately, my cooler and lunch sack made the cut, since my teammates made an executive decision and left some of my stuff behind.

I took the handoff from Teresa, who blazed in before I felt ready to go. The exchange point was pretty quiet this early in the morning, with most of the early morning teams already passed and the later teams not having started or caught up. I headed out on the quiet rural streets where I am pretty sure no cars passed me, aside from those adorning “Runners on the Road” posters. Over the first few miles I passed Rhubarb and Blackberry fields, a local dairy, and a teeny tiny bridge. At mile 2, I ran past a beautiful Catholic Church and had a little climb out of sleepy country town. The final few miles kept me relatively flat until I arrived at the next checkpoint at Banks High School. This leg was beautiful in its own right, but was definitely the precursor to the amazing rural legs coming up.

Despite all the amazing scenery, this is my favorite picture of the day – my teammates keeping me going between my back-to-back legs. You guys rock!

Due to the fact that we had one blogger have a work thing come out of nowhere, we were left with 5 total runners instead of the usual 6, which made a couple of us have to run an extra leg. After trying to pawn it off on Marilyn (dumb idea), I decided I would just tackle legs 2 and 3 back to back. I am actually pretty happy that I did this, as it allowed me to lead our team into trail-portion of the race on the beautiful Banks-Vernonia Trail. My teammates refueled me with Gatorade and loving words of encouragement at the high school before I took over the next 4+ miles.

Even though it was still relatively early in the morning, it was easy to see that the sun and heat was going to play a prominent role in the afternoon. This was my first time running the Banks-Vernonia Trail, and boy was it amazingly beautiful. Almost the entirety of this leg was run along this straight and shaded stretch. I passed a few teams along the way, and more than a few bikers passed me (it was a beautiful day for a bike ride too). After almost 10 miles, I could see the handoff zone in the distance and my tired legs managed to speed up with my first two legs in the books. There was a palpable energy at this exchange point, as many teams from a variety of times were all converging at close intervals. Everyone was cheering EVERYONE on – it was really incredible stuff. I slapped the bracelet on Joe and watched him speed off into the distance, knowing that his 8.4 mile stretch would be over before we knew it.

I have quickly become a big fan of one-day relays, and the Twelve Bridges Relay is one of my favorites because of the low-key, friendly atmosphere, and the fact that most of the course is on the peaceful, tree-lined, and traffic-free Banks-Vernonia Trail. I also had the privilege of running with a great group of goofballs, Team Run Oregon. Not only were we a well-oiled running team, but our backseat seatbelt choreography was also top-notch, though somehow Marilyn always ended up in the middle.

This year I drew the metaphorical short straw and was assigned Leg 4, the 8.4-mile uphill that Run Oregon’s resident iron woman Teresa had made quick work of last year. Last year I lucked out and got to run it in the downhill direction. This year I was in much better shape, so the prospect of 8.4 miles was a little less intimidating for this 5K specialist. I took the handoff from Matt and set off along the paved trail.

The first 1.5 miles or so were relatively flat, with a section across an open field, and then the trail entered the woods and began to climb. For most of the way the incline was pretty gentle, and the path was nicely shaded and cool. I usually find rails-to-trails paths a little dull because they’re so straight, but this part of the trail had just enough curves to keep it interesting. I settled into a nice rhythm and tried to concentrate on the peaceful and scenic surroundings, rather than the fact that I had umpteen uphill miles left to go!

With around two miles to go I came to the entrance road to Stubb Stewart State Park and saw my teammates waiting to cheer me on and offer some much appreciated water. At one point, I thought I saw the “One Mile To Go” sign, but it was a mirage: a sunlit yellow fern! Luckily, the real sign appeared soon after. I pushed on and soon came to the crest of the hill where the path leveled off for a while before taking a sudden and welcome downhill to the exchange, where Cheré was waiting to take off on a PR pace on Leg 5.

My only experience with relay races was last year, when I was asked to fill in last-minute for a van short a runner for the Ragnar NW Passage Relay. I didn’t know anyone I was running with, had only been a runner for a few months, and was really slow. Since then, I have been stand off-ish on doing another one. When my fellow Run Oregon friends asked me to join their team for the 12 Bridges Relay, I decided to give it another shot…and I’m glad I did!

My first leg was Leg 5, and it was PERFECT! Despite several steep switchbacks at the very beginning of the leg, the remainder of the 4.2 miles was all on a steady, gradual decline, shaded the entire way by a gorgeous tree canopy. Since it was a pretty hot day, I couldn’t have asked for a better way to start my share of the relay. Not only did I come in a minute and a half faster per mile than I had expected, but I was on cloud nine the rest of the day!

This was my second ever one-day-relay experience, and I definitely see the advantages compared to a traditional overnight relay! While it’s important to be prepared for a relay in terms of a well-curated packing list, the most important aspect of a relay is having awesome people on your team–and I am so grateful for the opportunity to have run the Twelve Bridges Relay with Team Run Oregon (in particular, my girl crush Teresa–can I please be more like her when I grow up? and my fellow beer connoisseur and sometimes nemesis Matt–thank you Joe and Chere for putting up with us).

My first leg (leg 6) was a 5.9mi run. It was fairly flat and I was ready to get those miles done while it was still somewhat cool! While I had initially been a little nervous that I might get lost as I’m not familiar with the area, all of my fears were quickly put to rest. There were tons of volunteers and the course was incredibly well marked. I was able to just go out and run! Given the smaller number of teams, there were lots of times that the runners were fairly spread out, but there were enough to keep me from feeling too lonely or isolated out there. I got to run around Vernonia Lake, a cool place in a neat small town, and put us back on the road towards North Plains.